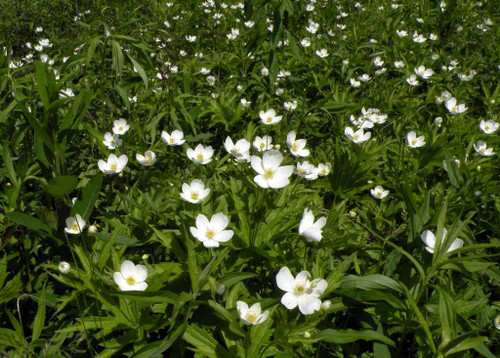 This native wildflower is spreading and can cover large areas aggressively, so it's not suited for conventional flower beds. But it is excellent plant for naturalizing (letting it go) in naturalistic planting, wild gardens, stream banks, as groundcover under big trees etc.

Usually 12" tall, with white flowers in May- June, spreading and groundcovering - it can smother other small and less competitive plants. Attractive foliage throughout the year.

Half shade, shade, can be grown in full sun in cooler areas and where the soil stays constantly moist. Adaptable to many soil types, prefers medium moist to moist soil.

This native wildflower can be found in most of the north American states (excluding western and southern states) and Canada in woodland edges, opening in woods, sedge meadows, bogs, see the USDA distribution map.

Best for naturalizing in bigger areas - it can form large colonies in moist meadows, woodland gardens, along streams, groundcovering in half shade.