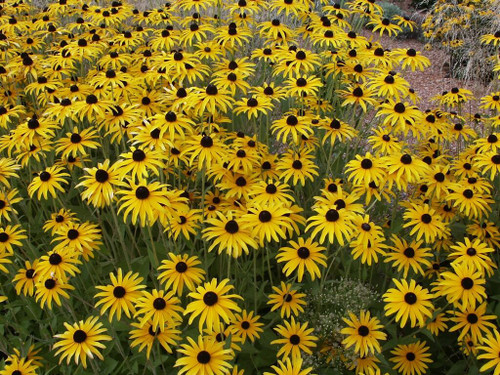 If there is true perennial classic, it has to be Rudbeckia ‘Goldsturm‘. This striking cultivar is popular in horticulture since introduction in 1949 and it‘s popularity was crowned by Award of Garden Merit by Royal Horticultural Society in 1993 and was selected by the Perennial Plant Association as the 1999 Perennial Plant of the Year.

What makes my heart really happy is writing about it‘s historic background, because this superb cultivar was discovered in my home country, in Czechoslovakia in difficult war years in 1937, that’s why it came to the market later after the WWII was over, in 1949.

Originally the seeds of the wild form were shipped from USA to The Botanic Garden of the University in Graz (Germany) and also handed to The Brother Schütz Nursery in Czechoslovakia (Gebrüder Schütz). Nursery of Brother Schütz in Olomučany at Blansko was at that time well established and recognized perennial nursery with central European overlaps.

In this nursery started his career Heinrich Hagemann (who became head gardener at world famous perennial breeder and grower Karl Foerster). When Heinrich Hagemann was on privat visit in this nursery, he noticed and admired the compact habit and floods of blooms of this floriferous charmers, that were already cultivated in experimental flower beds of so called ”Gethsemane garden“.

Heinrich brought some plants back to Potsdam in Germany in 1937 and made Karl Foerster to grow and propagate them. Seeing the flowers in 1938 for the first time, as the legend says, Karl Foerster called out 'Goldsturm' - 'Gold Sturm' = 'Gold Storm'.

Since then bright golden-yellow flowers of ‚Goldsturm‘ shine in gardens worldwide.

In spaces that are not aired enough, some leaf fungi diseases (septoria leaf spot) or powdery mildew can occur. If ‘Goldsturm‘ really suffer in some localities, you can replace it with new variety Rudbeckia ‘American Gold Rush‘ that is fungus diseases free!

Culture: full sun, half sun, half shade (will flower less there), average garden soil, moist, well-drained soils, loamy soils, clayish soils. Adaptable to sandy or rocky soil, if they are not too dry.

Origin: garden origin, seed line. Wild form of Rudbeckia fulgida var. sullivantii is native in areas from New York to West Virginia west to Michigan, Illinois, Missouri and Arkansas. Can be found in swamps, shorelines, fens and sedge meadows Wild form is not commonly sold, because of the extreme popularity of its ornamentaly upscale cultivar ‘Goldsturm’.

Deer/rabbit resistant : yes / yes, but still some mammal can browse the leaves