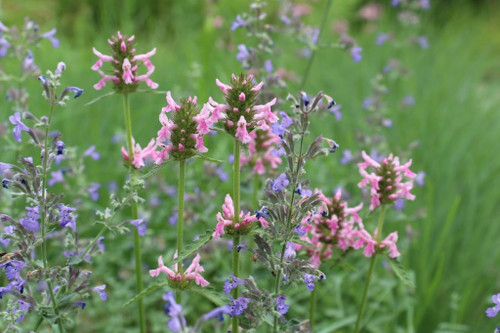 " 'Pink Cotton Candy' was bred by Richard Hawke from an open pollinated betony seedling and introduced by the Chicago Botanic Garden in 2009. Its upright flowering stems have dense whorls of cotton candy pink two-lipped flowers in which the upper lip is lighter pink than the lower lip. The flowers fade to a lighter pink creating an additional two-tone appearance. ‘Pink Cotton Candy’ blooms freely from June to August, occasionally blooming again in fall. It grows 1.5 to 2 ft. in both height and spread. U.S. Plant Patent #21436 issued on November 2, 2010"

Richard Hawke, Plant Evaluation Manager of Chicago Botanic Garden had luck and good eye. This betony has pretty looking leaves - somewhat glossy and ornamental for the whole season. Flower peak is early summer, but blooming sporadically continues till August, the seedheads turn dark brown black and decorate this perennial the whole winter (or till you cut it back).

Easy to grow and vigorous. Leaves stay more at the base, it will slowly spread to form medium-sized groundcovering mats.

Prefers average moisture (medium) and average soils, including heavier clayish soils (that are not waterlogged). Tolerates some droughts too. In hot and humid south will appreciate half shade.

Deer and rabbit avoid it.

This cultivar is patented and can't be propagated without licence.